At the Riverside campus of the University of California, a fraternity recently created and distributed a T-shirt that has unexpectedly made First Amendment history.

On the shirt is a drawing of a man watching the sunset. He is wearing a serape and a sombrero and holds a bottle. Also shown is a bare-chested man with a six-pack of beer in one hand and a bottle Â·in the other. At the front of the drawing is a bar, Papas & Beer, much frequented by America.n college students crossing the border.

An inscription circling the drawing was taken from an anti-racist song by Bob Marley: “It doesn’t matter where you come from, as long as you know where you are going.”

Demanding that the fraternity, Phi Kappa Sigma, be punished was MEChA (the Movimienlo Estudiantil Chicano de Azllan). A spokesman charged that the shirt “dehumanizes- and promotes racist views of-Mexican people.” Not only was the shirt impermissibly offensive but, said MEChA, it was the very model of “fighting words” under the university’s code of community values because it could provoke’ violent reaction.

A supporter of the T-shirt was Rafael Escribano, an assistant professor of Spanish, who said of the ecumenical Bob Marley message on the shirt: “It’s in perfect lrnrÂ· mony with the fact that this fraternity counts within its ranks plenty of members from non-Caucuasian backgrounds, including Latin6s- a diversity … that MEChA … cannot even begin to compete with.”

However, the administration-like many of its counterparts on other campuses-acted with alacrity and little thought. The fraternity’s charter was removed, and it was suspended from the campus for three years.

After all, a 1992 chancellor’s proclamation of the university’s credo made it clear that “while diversity of opinion is encouraged … physical, verbal or written acts which are abusive, defamatory, intimidating or disruptive cannot be tolerated.”

It is likely that Phi Kappa Sigma would have indeed been in exile for three years if a lawyer, John Howard, had not come on campus, brandishing the First Amendment as if it were Excalibur. Â·

John Howard is president of the Individual Rights Foundation in Los Angeles. Like the Center for Individual Rights in Washington, the organization lakes particular pleasure in battling politically correct administrators who cut down the free expression rights of students and professors.

“John Howard brandished the First Amendment as if it were Excalibur…[He] takes particular pleasure in battling politically correct administrators who cut down the free expression rights of students and professors.”

In entering this battle, Howard had the invaluable assistance of a new section of the California Education Code, which says that the regents of the University of California “shall not make or enforce any rule subjecting any student to disciplinary action solely on the basis of conduct that is speech or other communication which-whenÂ· engaged in outside a campus- is protected from governmental restrict ion by the First Amendment of the United States Constitution or the California Constitution.”

John Howard filed suit against the university in California Superior Court. He then proposed a settlement, noting that the university, as the lawsuit went on and upward through the courts, might well have to spend some $200,000 defending itself. And, said Howard, it would most probably lose. Â·

Instead, the university could settle without any significant expenditure of money – only such court costs as filing f ecs. The settlement would ensure the restoration of the fraternity to campus, but there would be one other nonnegotiable provision.

Howard insisted that the administrators responsible for the court martial of the T-shirt and the fraternity attend “First Amendment Sensitivity Training.” The university agreed in the settlement that its Office of General Counsel will instruct those officials in “the applicability of the First Amendment” and the relevant sections of the California Constitution.

“This victory,” Howard told me, “is particularly gratifying because of the precedent it sets. The more we get the idea across that there can be personal consequences for administrators whoÂ· attack freedom of speech, the less likely they will try to do that. It also seems particularly appropriate for them to have to submit to the currently fashionable ‘sensitivity training’ as a means of solidifying the point.”

Indications are that getting college officials to brush up on the First Amendment mc1y spread to other University of California campuses. But why not high school principals and other administrators too? And certainly school boards. 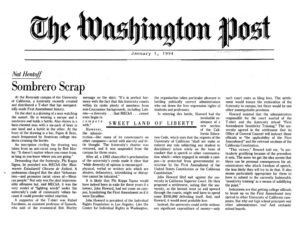