Category: In The News

Excerpts of the Variety magazine article is featured below:

“General Hospital” star Ingo Rademacher sued ABC on Monday, arguing that the company’s COVID vaccine mandate is unconstitutional and amounts to religious discrimination.
Rademacher, who played Jasper “Jax” Jacks on the soap for nearly 25 years, was red last month after refusing to get vaccinated. According to his lawsuit, Rademacher sought a religious exemption from the mandate, which ABC rejected. 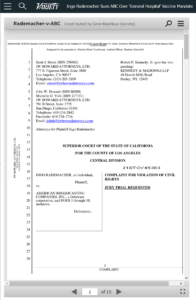 “I am entitled to a religious exemption against mandatory vaccination for COVID-19 on the basis of my deeply and sincerely held moral belief that my body is endowed by my creator with natural processes to protect me and that its natural integrity cannot ethically be violated by the administration of artificially created copies of genetic material, foreign to nature and experimental,” Rademacher wrote in an Oct. 11 email to Disney’s HR department.

Rademacher then had an interview with an HR lawyer, which, according to the suit, “was more akin to cross-examination.” The suit argues that ABC was required to honor Rademacher’s religious exemption, and that questioning the sincerity of his beliefs amounts to religious discrimination.
Steve Burton, another “General Hospital” star, confirmed on Nov. 23 that he, too, had been red from the show for refusing to comply with the vaccine mandate. Burton revealed on Instagram that he had applied for religious and medical exemptions, but that ABC had denied them.

Rademacher’s suit also claims that the vaccine mandate violated his right to privacy.

“This should not be a political issue,” the suit states. “There is no need for everybody to get the COVID-19 shot, even if the president demands it.”

The Fox 5 News article is featured below:

The People magazine article is featured below:

The ABC News article is featured below:

Without choice, ‘the government owns your’ body Rademacher exited ‘General Hospital’ amid a Disney-ABC vaccine mandate

After exiting “General Hospital” following almost two decades on the program, actor Ingo Rademacher joined “Tucker Carlson Tonight” on Fox Nation to discuss his new lawsuit against Disney subsidiary ABC over its coronavirus vaccine mandate.
Rademacher, who was denied a religious exemption, told host Tucker Carlson that submitting to the injection would go against many of his beliefs, including religion.

The actor, 50, spoke of his elderly parents who still live in his home country of Germany, where he said they hike every day in the Alps and are on zero pharmaceutical medications at their advanced age, due in part to their longstanding use of homeopathic and other remedies for illnesses.
The injections from Pfizer, Moderna and Janssen/Johnson & Johnson go against that life tradition, while the mandate effectively cancels out a human being’s individual body sovereignty, he said.

“To me, it’s staying healthy and dying healthy as well,” Rademacher said. “Being injected with something like this COVID vaccine â€“ personally, I don’t think I need it, and I think I should be able to make that choice.” He said that by submitting to the Walt Disney Company’s demands, which in turn are strongly supported by the federal government, he is giving away his body to officials in Washington, D.C. “If we don’t choose what to put in our bodies, we don’t own our body. The government owns you,” he said. “It’s so frustrating.”

Documents were filed by attorney John W. Howard on behalf of the actor on Monday, stating that Rademacher applied for a religious exemption to the mandate but was denied. He is also being represented by Robert F. Kennedy, Jr. â€“ the son of the late U.S. attorney general.
“I am entitled to a religious exemption against mandatory vaccination for COVID-19 on the basis of my deeply and sincerely held moral belief that my body is endowed by my creator with natural processes to protect me and that its natural integrity cannot ethically be violated by the administration of artificially created copies of genetic material, foreign to nature and experimental,” the actor wrote in an email to Disney’s human resources
team in October, per the suit.

Rademacher told Carlson he originally predicted a mandate would come down the pike after the Walt Disney Company began requiring workers at its amusement parks in Lake Buena Vista, Fla., to comply with such orders.

Earlier this fall, President Biden issued an executive vaccine mandate for most businesses and employees, but it has thus far been largely stymied or nullified by court decisions.
As ABC continues to go ahead with its mandate of the vaccine, other large organizations have paused or canceled their implementations â€“ including the semi-federal entity of Amtrak, itself a 50-year cause celebre of Biden, for whom the Wilmington station is named.

The National Railroad Passenger Corporation, as it is formally called, temporarily suspended its mandate, which officials at the railway initially told Congress would cause service disruptions and cuts beginning in early January 2022.

The ABC News article is featured below:

LA school employees say they’re being forced to get vaccine

A group of Los Angeles Unified School District employees say the district is forcing them to get the COVID-19 vaccine in violation of a federal statute that gives people the option to choose whether or not they want to access experÂ­imental medical. products during public emergencies.

“None of the currently availÂ­able vaccines for COVID-19 has received final approval from the Food and Drug Administration,” the complaint states. “Rather, each one of the COVID vaccines is an unapproved product that has been authorized for emergency use unÂ­der a series of emergency use auÂ­thorizations. The statute granting the FDA the power to authorize a medical product for emergency use requires that the person beÂ­ing administered the unapproved product be advised to his or her right to refuseÂ· administration of the product.” California Educators for Medical Freedom vs. Los Angeles Unified School District, 2:21-CV- 2388 (C.D. Cal., filed March 17,2021).

END_OF_DOCUMENT_TOKEN_TO_BE_REPLACED

Who is John Howard, and why does he want San Diego’s mayoral election nullified?

To supporters of Donna Frye, whose write-in candidacy has put her a hairbreadth away from becoming mayor, Howard is probably a front for various anti-Frye forces:

For Ron Roberts, who seemed poised to oust Mayor Dick Murphy before Frye came along. For backers of the strong-mayor ballot proposition, who won but never envisioned Frye as mayor. For pro-sports team owners, perhaps. For Republicans, certainly.

Despite ties to some of the above, Howard says he is acting on his own, motivated solely by his firm belief that the city charter prohibits write-in candidacies in general elections.
“Principle matters,” he said.

“The Constitution of the United States and the charter of San Diego matter. They’re the documents from which we derive all the benefits of where we live, and if we don’t keep them inviolate, then we expose ourselves to deep, deep trouble.”
Critics, of course, would be less suspicious had he taken legal action before the election, before Frye’s unexpected surge. Frye calls his lawsuit “sour grapes.”
END_OF_DOCUMENT_TOKEN_TO_BE_REPLACED

But one newcomer, a Los Angeles lawyer whose monogrammed white shirts and splashy ties contrast with his clients’ dusty boots and jeans, has become something of a hero.
END_OF_DOCUMENT_TOKEN_TO_BE_REPLACED

At Occidental College in Los Angeles, “unwelcome jokes, invitations, comments and looks” no longer put a student at risk of suspension or expulÂ­sion.

For John Howard, counsel and founder of a new Los Angeles-based nonprofit group, the Individual Rights Foundation, the mystery is that they ever did.

Howard, through IRF, last year persuaded the college not to expel fraternity Alpha Tau Omega for pubÂ­lishing a ribald limerick in its newsletÂ­ter.

That case is among some two dozen similar pro bono suits he has filed on behalf of students facing punishment by colleges and universities for crimes of expression.