But one newcomer, a Los Angeles lawyer whose monogrammed white shirts and splashy ties contrast with his clients’ dusty boots and jeans, has become something of a hero. 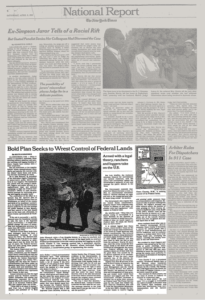 He is John Howard, 46, president of the Individual Rights Foundation, a conservative public interest law firm in Los Angeles. The foundation has joined with the county’s ranchers, loggers and public officials in a sophisticated legal and political campaign to fight the Federal Government’s efforts to curb environmental damage by restricting grazing and logging on public lands.

The centerpiece of the effort is a lawsuit that Mr. Howard filed in January in Federal District Court in Washington on behalf of the county and three of its wealthiest ranchers. In it, he argued that the Government had no authority to own and manage the public domain in New Mexico, and that control of the land should pass to the state and, ultimately, to Otero County (pronounced oh-TAIR-oh).

“John Howard is a hero to ranchers and loggers in Otero County, New Mexico.”

If the suit is successful — and Mr. Howard says his foundation intends to take the case to the Supreme Court, if necessary — it would completely change 150 years of ownership and management practices for more than 500 million acres of Federal land in the West.

“Because of how these lands have been managed, there has been a fundamental breaking of trust across the West,” Mr. Howard said. “People at the local level are eager to claim more authority to determine what’s best for them. For the last 10 years, the Federal Government has been giving these people the back of its hand.”

The Justice Department and New Mexico’s Attorney General, Tom Udall, a Democrat, say the constitutional theory underlying the suit has no basis in law and predict it will fail. In March, the Justice Department filed suit against Nye County, Nev., arguing that the steps the county’s commissioners had taken under an identical legal theory to gain control of public land and intimidate Federal land managers were unconstitutional. Mr. Howard also represents Nye County in that case.

Conservationists say that the legal tactics used by Western ranchers, timber companies and mining conglomerates represent the well-financed efforts of a minority eager to cash in on lucrative Federal subsidies that support their way of life.

“What this is all about is money,” said Faye Lee, a retired English teacher and publisher of “A Hoot and a Holler,” a local environmental newsletter here. “The community has been all stirred up by a few people who see an opportunity to make a lot of money if the laws change. It’s not going to work. Those lands are the public’s lands. They aren’t the domain of a few people who think it’s theirs.”