Who is John Howard, and why does he want San Diego’s mayoral election nullified?

To supporters of Donna Frye, whose write-in candidacy has put her a hairbreadth away from becoming mayor, Howard is probably a front for various anti-Frye forces:

For Ron Roberts, who seemed poised to oust Mayor Dick Murphy before Frye came along. For backers of the strong-mayor ballot proposition, who won but never envisioned Frye as mayor. For pro-sports team owners, perhaps. For Republicans, certainly.

Despite ties to some of the above, Howard says he is acting on his own, motivated solely by his firm belief that the city charter prohibits write-in candidacies in general elections.
“Principle matters,” he said.

“The Constitution of the United States and the charter of San Diego matter. They’re the documents from which we derive all the benefits of where we live, and if we don’t keep them inviolate, then we expose ourselves to deep, deep trouble.”
Critics, of course, would be less suspicious had he taken legal action before the election, before Frye’s unexpected surge. Frye calls his lawsuit “sour grapes.”

He lost in court yesterday but said an appeal is likely.
While he insists he is acting alone, scraps of tinder fuel the conspiratorial fire:

o He supported Roberts and served as a board member of the group that fashioned Proposition F, the strong-mayor ballot measure.

o One of his clients is The City Club of San Diego, whose president, George Mitrovich, led the strong-mayor effort.
o His wife, Kathi, was an aide to former Mayor Roger Hedgecock, now a talk-radio commentator critical of the election.

Howard says neither Roberts nor Mitrovich took part in preparing the lawsuit. Both men say the same. As for Hedgecock, Howard said he got a call from Hedgecock’s producer, who said the talk-show host was surprised Howard did not alert him to the litigation.

Howard laughs at the notion Padres owner John Moores or Chargers owner Alex Spanos may be behind this.

“If Moores or Spanos or any of those other people will hire me to be their lawyer, I’d be a happy man,” he said. “I’m sure they pay their bills and I’m sure their bills are big. I’ve never met the Spanoses. I sat in a meeting on strong-mayor four years ago when John Moores walked in, sat down, talked for about 10 minutes and then left.

“Frankly, don’t you think it’d be a little embarrassing, asking people for money? I’m doing this on my own initiative.”
Why did he wait until after the election to file suit?

“I’m not the guardian of the city,” Howard said in an interview after yesterday’s hearing. “I had no responsibility, that I can discern, to try and do something like this before the election. I wasn’t running for office.”

Howard runs a small business- and corporate-litigation practice in downtown San Diego. He lives with his wife and their cat in Rancho Santa Fe.

Howard is generally not a high-profile litigator, but some of his cases have attracted attention. Over the years, clients included:
o A University of California Riverside fraternity accused of insensitive speech for a T-shirt design. In a settlement, Howard and the Los Angeles-based Individual Rights Foundation got university administrators to agree to undergo five hours of First Amendment “sensitivity training.”

o A New Mexico rancher who sought to test the constitutionality of federal ownership of public lands; and Nye County, Nev., involved in a similar challenge. Howard lost both cases.

A conservative Republican, Howard is inspired by Patrick Henry, the American patriot famed for declarations, in the face of British oppression, such as “Give me liberty or give me death!” and “If this be treason, make the most of it!”
He is a trustee of the Patrick Henry Memorial Foundation, which maintains Red Hill, Henry’s Virginia home, law office and grave site.

Howard, 55, was born in Rhode Island and raised in Virginia, the third son of Rear Adm. Joe Howard, a Pearl Harbor survivor and supply officer who served as speechwriter for Adm. Arleigh Burke, chief of naval operations from 1955 to 1964.

He graduated from the University of California San Diego in 1971, and California Western School of Law in 1976.

Howard calls himself apolitical — he says he dislikes campaign politics — but he writes a politically charged column in the Presidio Sentinel, a monthly that calls itself commentary-driven.
His pen is sharp. In a column this month, he denounced Murphy as a dishonest man whose “monumental ineptitude is staggering.” In the same column he wrote of Frye: “Her utter cluelessness is beyond shocking, it is downright scandalous.”
Howard was a Murphy backer four years ago. But he dropped him after the March 2000 primary. He cited several reasons, including Murphy’s embrace of Proposition 22, the successful statewide initiative that prohibits the state from recognizing same-sex marriages.

Howard said Proposition 22 offended his belief in personal liberty — including for gays and lesbians who want to marry. He said he told the mayor, “I thought it was mean-spirited and we shouldn’t have done it.”

“It seemed to me that that initiative was a way of saying to the gay community that, `We don’t like you,’ ” Howard said. “I realize that puts me at odds with my fellow conservatives and fellow Republicans. I’ll be drummed out of the Republican Party, or something like that.”

Michel Anderson, a San Diego consultant and lobbyist who worked on Hedgecock’s mayoral staff, has known Howard for 20 years, and has been a client.

To Anderson, Howard is quiet, smart and fiercely independent.
“He’s not going to carry anyone’s water. . . . No way,” Anderson said yesterday. “If people think John Howard is involved in some type of conspiracy, my response is, you don’t know who John Howard is. John is a man of massive integrity, and there’s not many like him.”

Click on thumbnails below to view the original article. 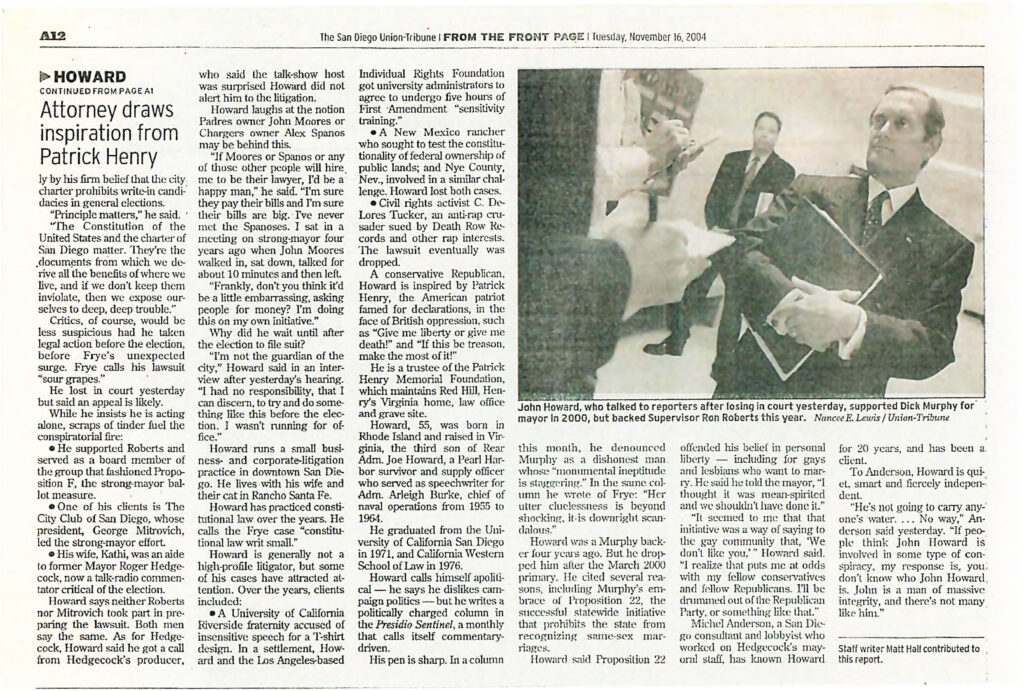